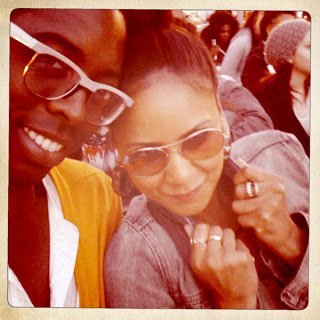 Me and Courtney K..Desperately Seeking Susan Screening.  LA Film Festival 2010
Ahh June 21st…
The first day of summer, longest day and shortest night of the year…and just so happens to be the day my 9 month old gestated self decided that I had had enough of the comfort and warmth of the womb…  That was it ..I had heard the muffled voices, listened to the muffled music and shared one to many a meal with the lovely lady whom I was to call mom for the rest of my days.
Story goes that Mom and Dad were at a restaurant and she decided against her better judgement and got the fudge chocolate cake…three bites and I was on the way..
Now I won’t tell you how old I am today..because a very wise older lady once told me that a woman should always keep them guessing.  😉
and as long as the Lancome face cream and multi vitamins allow me to do that..believe I will!
Anyhow…a  week ago I decided that I needed to clear out the clutter and this had to be done before my birthday.  So the Saturday before my big day I decided that my office/everything room would be the first to be gutted…and my dear friend Mr. Courtney K (seen in the above photo) just so happened to be there as I made the first incision.  I told him it would be a two hour job..in and out..so he signed on without hesitance…
….and….
6 hours later we were done..
Who knew that one could actually accumulate 7 trash bags worth of old papers, bank statements and  photo’s of the ex…and that was 5 trash bags of stuff that had been put through a shredder.
…not to mention the cards, books, jewelry, clothes, and gadgets that were also sent to there maker!
We shredded.  We cleaned.  We organized…well Courtney organized because organization is apparently not my strong suit..
Wow what a feeling!!  I highly suggest to everyone..throw it all away!  In that process I realized that I don’t need THINGS.  Not to say that we have not earned the right to enjoy THINGS, but in that 6 hour journey I realized that I can enjoy these THINGS and not have to hold on to them forever.  They are firmly pressed in my memory..
Plus it opens the path for new THINGS to enjoy..
Which is exactly what we did after the cleaning extravaganza!!
My present to myself was a free screening of Desperately Seeking Susan at the LA Film festival downtown.  Out doors, at night, big screen and snacks.  I loved this movie as a kid and I love it now.  Can I just tell you how Fierce Madonna was an still is..
Oh and I got to wear my first b-day gift of the year… my new Tom Ford round gold sunglasses..  Thanks Grandma.. She actually picked them out herself!!
So now that I have purged and enjoyed.. I can only go through this next year of my life with optimism and love…  two THINGS that we could all use a bit more of..I certainly know I can..
OPTIMISM AND LOVE…. I “LIKE”
Taye 😉
*Photo taken on iphone with the Hipstamatic app
Share:

NYFW.. BCBG RUNWAY..and me in WWD